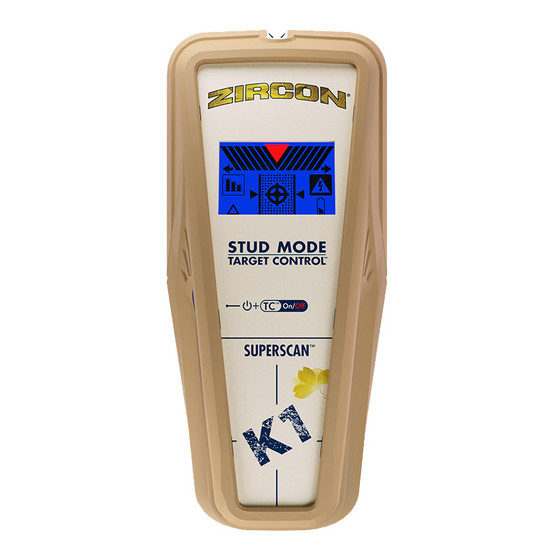 The SuperScan® K1 offers two distinct detection modes - TC™ and StudScan. The ColorTrip® Display conveniently details information. The screen will illuminate blue in TC™ mode and indicate the center, edges, and direction of wood studs while also enabling the user to identify clean, ‘safe-to-drill’ zones by utilizing the new ‘Trust but Verify’ technique. When TC™ mode is off, the tool will perform in StudScan mode indicating the center, edges, and direction of both wood and metal studs. The Target Spotlight illuminates on screen and the SpotLite® Pointer shines on the surface being scanned when the center of a stud is found. The SuperScan® K1 is powered by a 9V alkaline battery, battery not included.

The Key to Success is the Battery

The installation of a fresh battery, with an extended expiration date, is required to steadily power the integrated LCD screen in Zircon® tools.

Warranty UNITED STATES OF AMERICA (USA) AND CANADA LIMITED LIFETIME WARRANTY Zircon Corporation (“Zircon”) warrants to the original purchaser (or original user by gift) that this product will be free from defects in materials and workmanship for its useful life (not to exceed twenty years from date of purchase). This warranty is limited to the electronic circuitry of the product, and specifically excludes consumable parts, including batteries, and software, even if packaged with the product. Defects caused by abuse, modification, handling contrary to these instructions, other unreasonable use, or neglect are not covered under this warranty. No liability is accepted for normal wear and tear and minor defects which do not detract from the function of the product. THIS LIMITED LIFETIME WARRANTY IS IN LIEU OF ALL OTHER WARRANTIES, EXPRESS OR IMPLIED, INCLUDING THE IMPLIED WARRANTIES OF MERCHANTABILITY AND FITNESS FOR A PARTICULAR PURPOSE. IN NO EVENT WILL ZIRCON BE LIABLE FOR ANY SPECIAL, INDIRECT, INCIDENTAL OR CONSEQUENTIAL DAMAGES RESULTING FROM POSSESSION, USE, OR MALFUNCTION OF THIS PRODUCT. NO OTHER REPRESENTATIONS OR CLAIMS OF A SIMILAR NATURE WILL BIND OR OBLIGATE ZIRCON. Some states do not allow limitations on certain implied warranties and/or the limitation on incidental or consequential damages, so the above limitations and exclusions may not apply to you. This warranty gives you specific legal rights, and you may also have other rights which vary from state to state. This Limited Lifetime Warranty applies only to products purchased within the United States of America (USA) and Canada. Any defective product returned to Zircon, freight prepaid, along with dated purchase receipt and $10.00 to cover shipping and handling, will be repaired or replaced, at Zircon’s option. If the returned product is no longer available, Zircon may replace the product with a similar product of similar function. This is your sole and exclusive remedy for breach of this Limited Lifetime Warranty. To return product, call the Zircon Customer Service number below to request an RMA number and return product with shipment tracking to: Zircon Corporation Attn: Returns Department 1580 Dell Avenue Campbell, CA 95008-6992 USA Include your name, return address, RMA number, and package tracking number. Allow 4 to 6 weeks for delivery. If you do not agree to the terms of this Limited Lifetime Warranty, you may not use this product and must promptly return it to the retailer, along with a dated purchase receipt within 30 days of purchase for a refund of the purchase price. Customer Service: 1-800-245-9265 or 1-408-963-4550 (Mon – Fri 8 AM – 5 PM PST, excluding holidays) Monday–Friday, 8:00 a.m. to 5:00 p.m. PST info@zircon.com
×

With the Breaker ID, you don’t have to shut off power to the entire house, or go through&…